The video has been upload to YouTube as a 4K MP4 file, directly from BluffTitler. Only post processing is the 360 Injector tool from YouTube to indicate that it's a 360˚ video. 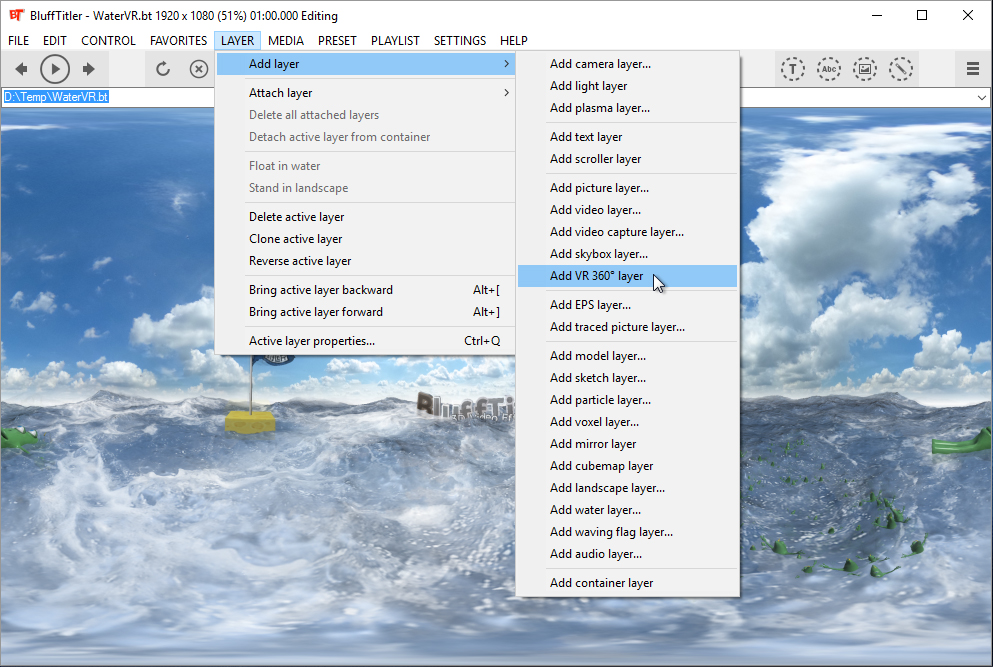 Here's how to export as 360˚. It's not an export method, but a layer that renders the current show as an equirectangular picture. This way you have full control and can see exactly what you are doing. Switching to normal view is as easy as making this layer invisible with the VISIBLE checkbox.

Notice the other new layers in the submenu!

Nice the airplane, I almost missed it.
I'm dreaming of all the possibilities. Can you make a storm/wind and rain with the same tools.

1. Is there a reason why the skybox is a layer instead of a picture style option?
2. Can you use a 360˚ video as skybox? From 3d camera edited source like the Ricoh Theta?
3. The foam is in the texture, right?
4. Was this rendered with your NVIDIA GeForce GT 620? How long did it take?
5. Does the "stand in landscape" also work with the camera layer?

G R E A T new layers. You've done good work Michiel. I hope you will add this show with the next version of BT.

I like!
The water layer, the landscape layer and the skybox layer among others.
More possibilities. Keep up Michiel!

We are all eagerly waiting for this version!!!!
i love it.

This is awesome and wonderful, Thanks Michiel.

Thank you all for your enthusiastic feedback.

Filip, thank you for spotting the plane!

Glad to hear it I have been in 360VR and 3D for a bit now.
Will there be any edit abilities after importing a video file.
Well got the Rioch Theta S warming up and the 4 HTC EVO3D
Lets see this bad boy ! 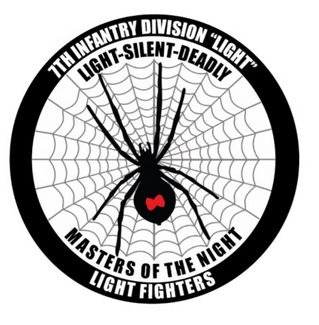 johnsolar283, in BluffTitler all effects can be applied to pictures, photos, videos, animated GIFs, webcams, TV tuners and indeed also to 360˚ videos!

LostBoyz, when you look to the left you can see a waving flag, a flag pole, an orange flag pole top and a block of cheese. Those 4 layers are attached to the same container layer that is floating in the water.

Does the VR 360˚ layer work with the Camera Pupil Distance?
So it works with Google Cardboard and other VR Headset/Glasses? 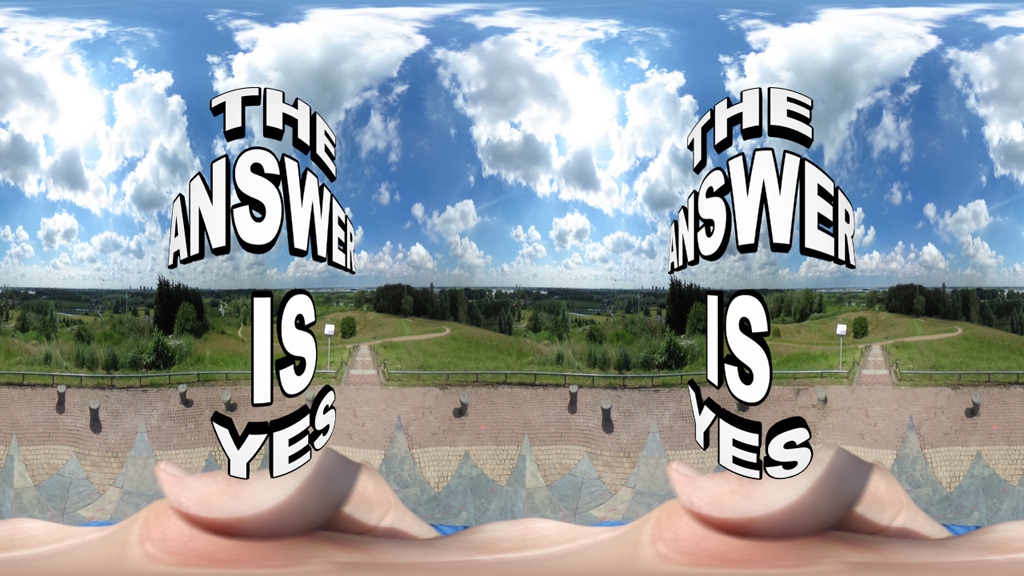 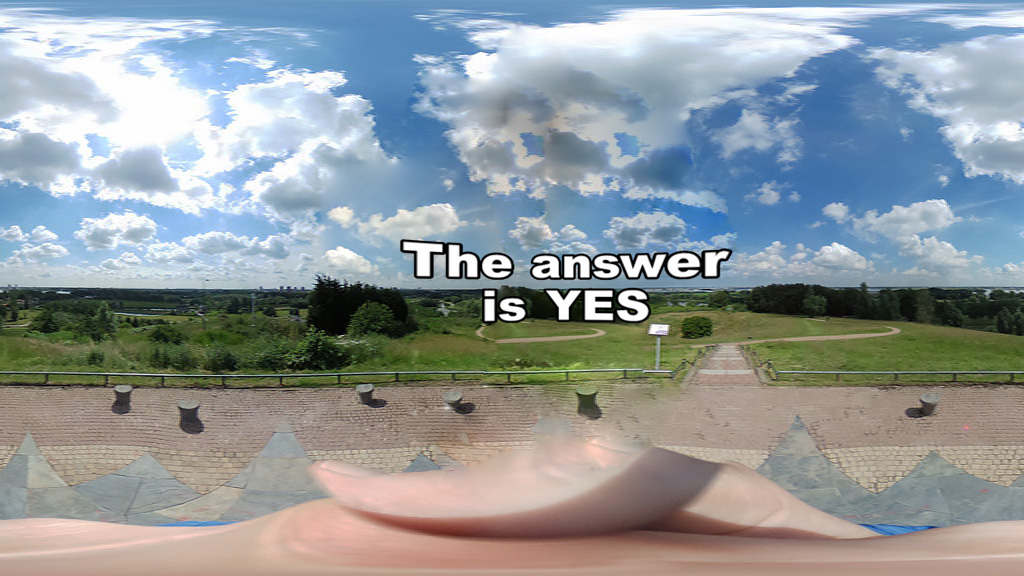 The text was a bit BIG to use in Blufftitler with the new skybox.cfx

But good to see it, because it was not mentioned or shown before.

Also nice to see that text attached to the VR 360˚ layer will look straight.

The distortion is caused by the equirectangular projection. The VR headset player corrects all this.

You do not have to "attach" anything to the VR 360˚ layer. Everything is automatically exported. The purpose of the layer is only to offer export options with its layer properties. Maybe this is confusing and all the props should be in the export as video dialog. The disadvantage of this however is that you don't see what you are doing.

It is not confusing; I just didn't know and now I do :)
Please continue, it looks great and trust that everything is for a reason and that usability is always on your mind.

I just wanted to test, just a bit eager I guess, and I downloaded your picture an edited it to make it work with the new skybox.cfx. because it was already SBS 3d I had to make it half and stretched out to make it "normal" again that's all.

There is still a lot to learn on this fairly new VR way of presenting, and I do have a lot of questions because I am seeing real potential with what you've already shared, so keep doing what you are doing well and we will wait until you are satisfied. But know that we are already imaging how to use this new feature and from this questions will arise, so forgive my impatience.

I'm thinking of using Blufftitler to add pictures, text, models etc. and some sort of navigation to 360˚ video footage.

I don't own a 360˚ camera yet but it has to be 4k+ and most have some overlap from the lenses like 195˚ on both lenses for better stitching and tripod removal.

I've seen that ones the footage is in equirectangular format it can be edited in most NLE 's and even move horizontally to a place to focus the viewers attention on.

One of the things I want to use Blufftitler for is to softly guide the VR headset wearing user to a place where something is about to happen, by subtle arrows. Just playing with that idea, so you don't miss the airplane flying over for instance.

With 360˚ cameras like the Ricoh Theta you can create full 360˚ photos with a single click. The Ricoh Theta S shoots in 5376 x 2688, which is good. But the sharpness is not perfect. The Ricoh costs €400 and fits in your pocket.

To create sharp 4K+ 360˚ photos you need a reflex camera, a fish eye lens, a tripod that can rotate around the centre of the lens and stitching software. This will cost you about €2000, you will get back pain carrying all the equipment and get tired of all the post processing and stitching.

At this moment, July 2016, I don't believe there's something in between those 2 worlds.

On the Bixorama page you can find links to the most popular 360˚ cameras:

Well I was thinking of buying the Samsung Gear 360:
tweakers.net... (use chrome to translate the website because it is in dutch)

It is a one shot 360 photo 7776x3888 and 360 video 3840x1920 camera with two fisheye lenses at 195˚ and costs € 349,- and weights 153 grams. The downside is that live streaming and remote controlling the camera is only with the newest Samsung smartphones like the S6 and S7 series. It has controls on the device and you can use the usb port to attach it to a PC for editing with the software that comes with it.

For me it is for experimental uses the right fit, right now, because many will follow even this year like the nikon keymission 360. For professional use is 4K still to low for 360 video and 12K would be preferred. www.360heros.com...

Good luck! I'd be very interested to hear your experiences with the Gear 360. 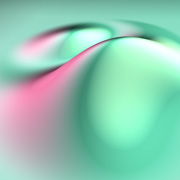 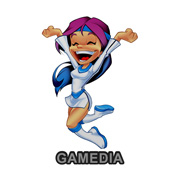 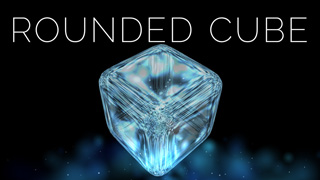 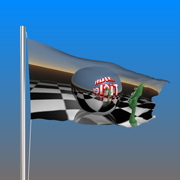 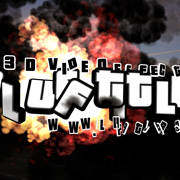 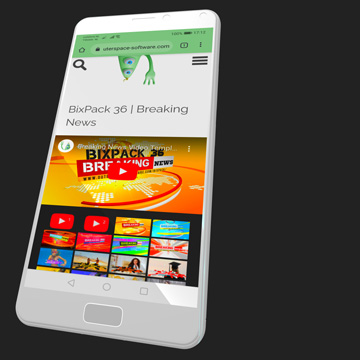