Bixelangelo is a vector editing app. It has been designed for creating EPS files for use in the vector and sketch layers of BluffTitler.

Bixelangelo is different from vector editing apps like Adobe Illustrator, Affinity Designer and Bohemian Coding Sketch in the following ways:

The sketch can be rendered as a solid shape by the vector layer, or as a 3D curve by the sketch layer.

The sketch can be used on its own or as an invisible animation path for text, picture, model, camera and other layer types.

All examples have been designed in Bixelangelo and rendered in BluffTitler 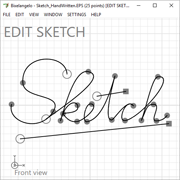 Bixelangelo records your handwritten sketches/texts and exports them in the EPS format for use in the sketch layer of BluffTitler.

Bixelangelo generates the .bt BluffTitler show files to get you started. 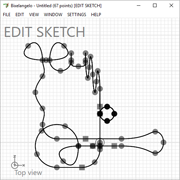 Bixelangelo offers standard elements like a looping, a corkscrew and a batwing to quicky design complex roller coasters.

Bixelangelo generates the .bt BluffTitler show files to get you started. Learn more 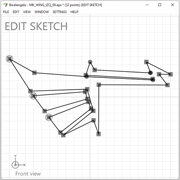 Use Bixelangelo to design shapes to build complex models inside BluffTitler. 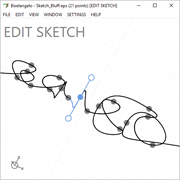 A free evaluation version is available:

Subscribe to our newsletter and we will keep you informed!

The user guide can be found here.