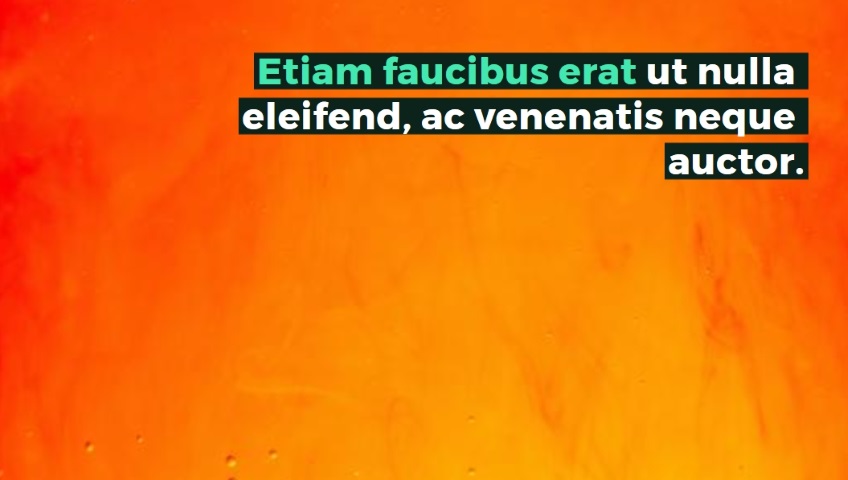 Can I color only a few words of a sentence automatically, as in the attached picture?
Is it possible to use a tag or other way to automatically color some words in a sentence?
Example - I have a text in a rss or xml file with different sentences, I would like to display a sentence and color only some of the words as in the attached image
Code example
<green>Etiam faucubus erat</green> ut nulla eleifend, ac venenatis neque auctor
or
<#00FF00>Etiam faucubus erat</#00FF00> ut nulla eleifend, ac venenatis neque auctor

For a single sentence, the rainbow effect can be a solution. But if in a rss or xml file I have more sentences to display, and the words to be highlighted are placed at different points in the sentence, the rainbow effect I do not think is the solution.
It would be interesting to have rss or xml text formatting tags to be able to create videos with phrases of great effect in a very simple way.
a video taken at random from youtube www.youtube.com...

maybe a solution could be a wordwriter property that would work like the Writer property but where the step would be the word and not the letter, then duplicating text layer with an other color it would be possible create a karaoke effect using this new WRITE property. Or maybe just adding a new property : WordMode= true or false in association with writer property

Let me try to understand this:

You want a dynamic piece of text from Xml or rss feed and then alter the colour of some text in a sentence?

Since the computer doesn't now which part you want to highlight by an AI or sophisticated algorithm, you would have to edit the text like you proposed by adding <#00FF00> and closing tag to a part of sentence.
But this would make it static.

The only reason I see you don't want to copy the text just right in BluffTitler and edit it there is the background show which presents this text animated, but you could use the same show with different text in slides for the playlist.

I don't see the problem, so please clarify.

I would make slides of the shows with incremental parts of the text, by making the first show with the first text and clone this text and give a different colour and use the writer property to set where to start end and this coloured text as template. Now you have only to copy the next part of the text ONCE for the next slide and adjust the sliders of the writer property to select the coloured part you want to present in this continuing text and do this for each slide till you are out of text, then add all these shows in the playlist and let it render as one long video of long text with coloured highlights.

By dimanic text I mean that the text is written outside of BT
I would like to change the color or another feature of some text words without modifying the BT template by acting only on the xml file.

Oke, dynamic text outside of BT that you want to edit has to be downloaded to edit with your proposed colour tag thus making this text offline and on your pc and therefore STATIC because you want to edit this feed or stream by editing the colour.

Because you made this compromise in order to have this ability to edit the colour, you can then also copy this offline text that you have now on your pc into BT.

This is the RSS4 dynamic show template that came with the installer.

Made with clone text changed colour and writer property set to a specific part of the text.

Other then a A.I. or sophisticated algorithm to determine what you would highlight in a next headline you don't know because it is created by someone else it would have to be done manually.

Therefore you have to read the text that doesn't change after that, in order to place the highlight and therefore you have the text and you could with little effort also copy this text into BT or change the writer property slider to edit feed like I did in this video.

That is my point.
And this works.

Edit:
So this person is also going to add the colour information?
If not than it stands, you would have to read the text in order to determine which part to highlight.

the video can not be seen

Strange, de video is set to hidden instead of public but with the url given it should be playable.

But I have set it now to public.

Thanks Komies for the example.
ok with writer I can color a word.
Now the problem is to create the background to the sentence

View all articles by GaspareNet