I don't know, if you've ever seen or can remember the Nexus from Star Trek 7. Here's the BluffTitler version, based on the water template "Sunset1". The water layer is transparent and the text is made out of many unterscores with a very small spacing. Added particles with gravity coming from behind and some small lightning. Oh, and the light off the sky is so dim, because a mad scientist has destroyed the sun moments ago. ;-)

That was Generations ago, Thorsten 😅

Malcom Mcdowell, Patrick Stuart and William Shatner in one movie!
It was a great passing of the baton to a Next Generation within the movie franchise.

I can only imagine how expensive the equipment was back then to achieve an effect like that. Not to mention render times. And nowadays you can do something like that on your computer at home in real time. BluffTitler makes it really easy to get stuff like that done.

Here is my list, I believe it shows also my age through preference:

An avid fan of the Flash Gordon serials with Buster Crabbe, Space Patrol TV series and Captain Midnight I just could not get in to Star Trek.
Likewise for the Star Wars flicks.
Now I did eat up the Battlestar Galactica TV show. It's a real favorite.
Love the Copperhead serials with Dr. Satan too!

Thanks, SMSgtRod. I really was into Galactica, too. But Trek was my first love.

Komies, overall I agree with your list. And it's a confirmation that the even numbered movies are the best (with only a few exceptions like Nemesis). Have you read Fade-in pineapples101.files.wordpress.com... from late Michael Piller? It's interesting how Insurrection came to be. It was a really promising story before the studio, the budget, and whatnot damaged the initial pitch beyond recognition. 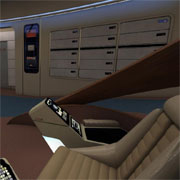 View all articles by Thor5ten