could you make the possibility of using a camera as a texture in a object o surface, I don't say a camera inside a colormap, I say a camera inside the same animation. In this way you could create "objects or surfaces" that display the same scene seen from a different point, but within the main camera view.
It looks like a cubemap but it would vary depending on the position and motion of the camera used as a texture.
Thanks.

Yes, a kind of 'view from' layer with position, rotation, field of view settings could be intersting to create screens, mosaics... an more...

This can already be done:
-add a cubemap layer
-use the generated cubemap in a picture layer using the Cubemap effect

Move the camera with the POSITION property of the cubemap layer.

Rotate the camera with the FX REFLECTION ROTATION property of the picture layer.

I did some tests, with cubemap it is not easy to obtain the desired angle, we must play with picture "cubemapX" layer rotation, position, fx rotation etc..., cubemap layer position, and depend on camera position/rotation too. So, a lot of parameters that make settings difficult, and a quality loss because of aliasing with cubemap.

thanks Michiel, I had seen that you can move the position of the cubemap but I had not noticed the rotation.
However, since the effect is similar could it be created? 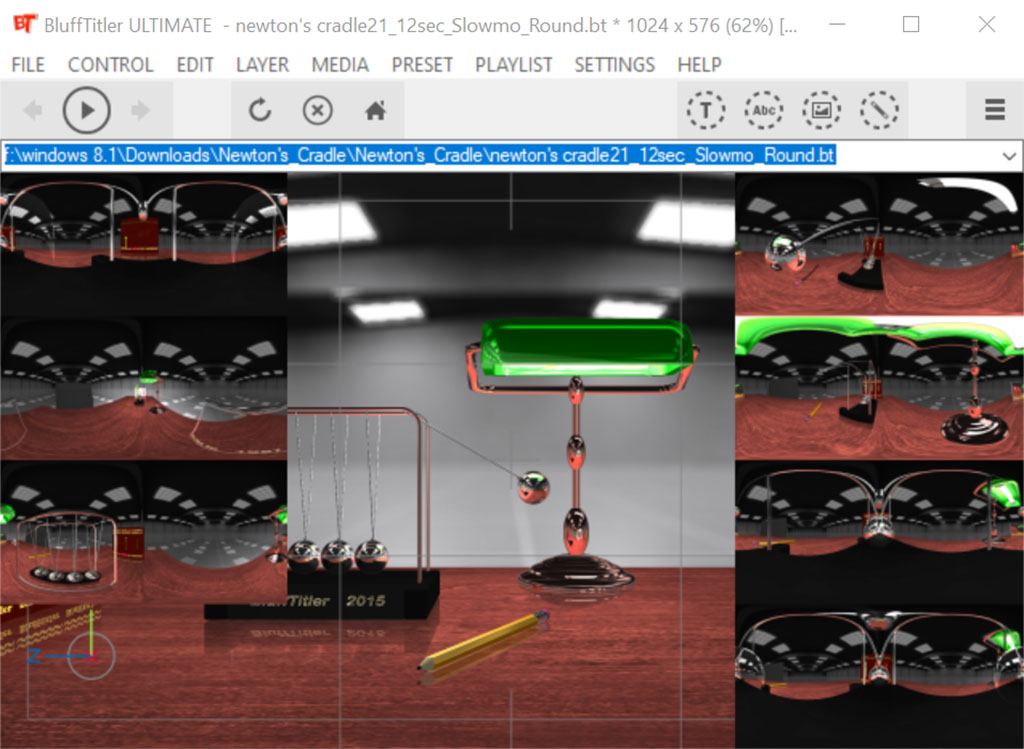 Where the balls, light stand and light glass and the metal on the pencil all have different positional cubemaps.

And press F2 to see all generated cubemaps in the same scene.
And standing on a cubemap layer you will see the 3d cross where the cubemap stands in the scene.

I remember this great show Alex, what I mean is just that the cubemap is not easy to use when we want to exploit it directly as image and not as only a reflections source.

Use the VR 360 layer and save as picture/movie. Place the camera in the scene where you want.

It's a good idea Alex!